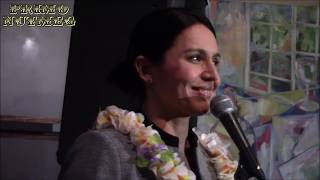 Gabbard & Sanders have no margin for error on foreign policy

Tulsi Gabbard made her first official 2020 campaign stops in New Hampshire last weekend. Following a visit to Iowa, Gabbard criss-crossed the Granite State for a series of town hall forums and meet-and-greets at pubs, cafes, bistros and diners. At that time, the runner-up of the 2016 Democratic primary -- and perhaps the real winner that year had it not been for collusion between the Clinton campaign and the DNC -- Vermont Senator Bernie Sanders had not yet announced that he

Politics is Pro-Wrestling: Why Trump & Obama Aren't in Prison

If there's one repugnant corporate media cliche that is absolutely true, it's that partisanship in the US is at an all-time high. The people of the United States have bought into the political narratives televised on Time Warner and News Corp. We have willingly marinated our brains in red and blue petrol. We have transformed ourselves into drooling cult members who despise our family members for joining the other cult across the street. We have become the worst professional w

On a recent appearance on the PRIMO NUTMEG podcast, free market "anarcho-capitalist" economist Walter Block stated that he would like to debate both Bernie Sanders and Noam Chomsky. Block, who is a Senior Fellow at the Mises Institute and the Harold E. Wirth Eminent Scholar Endowed Chair in Economics at Loyola University New Orleans, actually is a childhood friend of Bernie Sanders. Both attended James Madison High School in Brooklyn, NY in the late 1950s where both were on t

It's no secret that John McCain is one of the biggest hawks in Congress. A close ally of raving South Carolina lunatic Lindsey Graham, John McCain has been advocating for a Syrian "troop surge", calling protesters are "low-life scum", and joking about bombing Iran for many, many years. Even former President Jimmy Carter has publicly labeled McCain a "warmonger." Yet, despite McCain's record of sounding utterly unreasonable at nearly every turn, the corporate news media contin